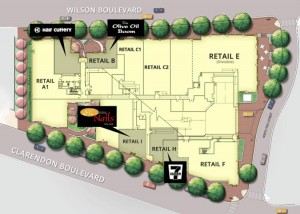 A 7-Eleven, a Hair Cuttery, a nail salon and a new gourmet store are all coming soon to the Courthouse area.

The four retailers are those announced so far for the nine ground floor retail spaces available at the new 2001 Clarendon Blvd building, which is expected to wrap up construction soon. The seven-story, mixed-use building, which replaced the former Taco Bell and the beloved Dr. Dremo’s Taphouse, has 30,000 square feet of retail space and 154 “trophy” apartments.

The nail salon, Modern Nails, appears to be from the same owner as the Modern Nails salons at the Pentagon City mall and Ballston Common Mall.

The 7-Eleven store is located on the Clarendon Blvd side of the building, only a few blocks away from an existing 7-Eleven store at the corner of Wilson Blvd and N. Quinn Street.

On the Wilson Blvd side, the Hair Cuttery will be adjacent to a gourmet store called The Olive Oil Boom. Reached by phone today, owner Judith Westfall — who moved with her husband from Texas to Arlington (Va.) just over a year ago, following a career in the oil industry — says Olive Oil Boom will sell  olive oils, balsamic vinegars, wine, beer, cheese and other gourmet products.

The 1,360 square foot store will have an “oil company theme,” she said. Customers will be able to enjoy their purchases outdoors in a courtyard space next to the store.

Westfall says she’s hoping to open at some point this fall.