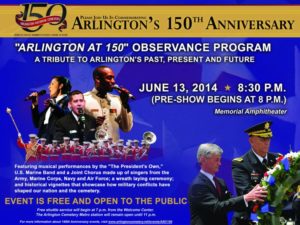 Arlington National Cemetery will host a concert and observance next Friday in honor of the cemetery’s 150th anniversary.

The event, starting at 8:00 p.m. on June 13, is free and open to the public. It will be the first-ever evening event held at the cemetery’s Memorial Amphitheater, according to organizers.

“‘Arlington at 150’ is an hour-long live military show featuring musical performances by ‘The President’s Own,’ U.S. Marine Band and a Joint Chorus made up with singers from the Army, Marine Corps, Navy and Air Force; a wreath ceremony and historical vignettes that showcase how military conflicts have shaped our nation and the cemetery,” according to a press release.

“Seating is available on a first-come, first-served basis in the amphitheater,” the release continued. “Attendees are encouraged to arrive early to ensure access and should plan to be seated no later than 8:00 p.m.”

The Arlington Cemetery Metro station will remain open until 11:00 p.m. to accommodate the event.

Arlington at 150 is one of a number of special events taking place over a 5 week commemoration of the cemetery’s sesquicentennial.