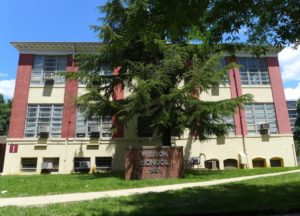 Arlington Public Schools has floated the idea of moving the H-B Woodlawn program to the Wilson School property in Rosslyn in the coming years.

The plan was introduced, according to the presentation, after APS staff received feedback from the School Board and the community.

Another solution proposed for alleviating middle school capacity problems is a $117 million, 1,300-seat middle school at the Wilson School property. Yet another is a combination of $59 million for an addition at the Reed-Westover Building to house H-B Woodlawn and Stratford programs; $48 million for an addition to H-B Woodlawn’s current building to house a 1,300 seat middle school; and $9 million to renovate part of the Madison Community Center, a former elementary school, to house the Children’s School daycare program for the children of APS employees. 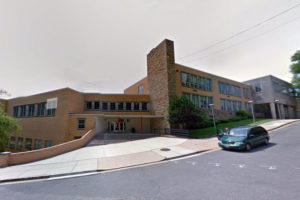 APS staff said in the presentation that there are currently 204 middle school students in the Rosslyn area spread out among five middle schools, with 142 attending Williamsburg Middle School on the western edge of the county. APS also projects 73 more students will come into the APS system from the approved, but not under construction, residential projects in the Rosslyn area, like Central Place and Rosslyn Gateway.

“The CIP process is very fluid, and staff continues to work to refine the proposed plan and options for Board consideration, based on School Board direction and community feedback,” APS spokesman Frank Bellavia told ARLnow.com.

Tonight, APS Facilities and Operations staff will be presenting another revision to the proposed CIP to the School Board, and Bellavia said that could include changes to the proposal to move H-B Woodlawn to Rosslyn.

After tonight’s informational meeting, there will be another CIP work session on June 10 if needed, and the School Board is scheduled to adopt the CIP on June 17 before it goes before the County Board on June 19.

END_OF_DOCUMENT_TOKEN_TO_BE_REPLACED

More Stories
Morning NotesDon Beyer: Why You Should Vote for Me