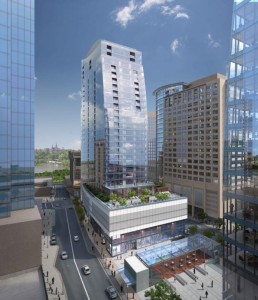 The McDonald’s at 1823 N. Moore Street in Rosslyn will soon be closing to make way for a 31-story mixed-use residential skyscraper.

Developer JBG expects to begin construction on the first of two planned towers of its Central Place development by early spring, the company says. The 31-story, 355 foot tall building will house 377 “impeccably-designed residences” along with 25,000 square feet of retail space. There will also be a 15,000 square foot public plaza built with the development.

“Central Place will be a striking addition to the Virginia skyline and offer some of the most spectacular views available of the nation’s capital,” JBG said in a press release. “It will be the tallest building in JBG’s development portfolio.”

The development will require the closure and demolition of an existing, stand-alone McDonald’s restaurant and a small existing public plaza. The site is on the same block as the new entrance to the Rosslyn Metro station. 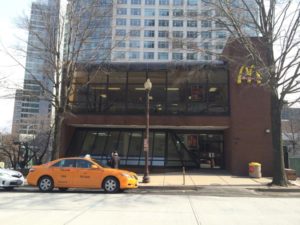 Chevy Chase-based JBG, which is partnering with the State Teachers Retirement System of Ohio to finance the development, told Rosslyn stakeholders that construction will begin soon and the McDonald’s demolition will be underway by May.

“Beginning next Monday, February 10th, Clark Construction will mobilize and construction will begin with the installation and relocation of utility lines on North Lynn Street,” the company said. “Demolition of the existing McDonalds building and excavation activities will begin in approximately 3 months.”

Last year JBG completed then sold the Sedona and Slate apartment development, located at 1510 Clarendon Blvd in Rosslyn. The company is planning to eventually build a matching Central Pace office tower, to the south of the residential tower.