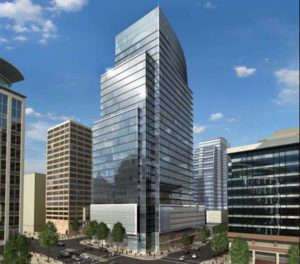 The JBG Companies will ask the Arlington County Board this weekend for permission to change the order of its massive Central Place project in Rosslyn.

The project has been delayed because JBG “has encountered difficulties financing the construction of both buildings,” the staff report says.

The Central Place residential tower will consist of 350 apartments and will replace what is currently a McDonald’s restaurant and a small park.