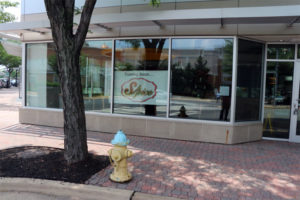 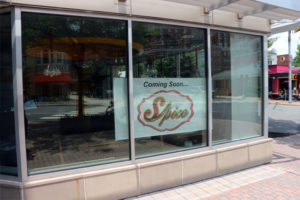 A combination Mediterranean restaurant and Italian hoagie shop could be opening at the corner of Wilson Blvd and N. Garfield Street in Clarendon as early as Friday.

“Spice” will occupy the same space that housed Le Sandwich for 10 days and previously was home to Cafe Wilson, Paciugo Gelato and Street Corner Cafe. Its owner, Yasser Mohamed, who also owns and operate Larry’s Homemade Ice Cream across the street, held the lease for Le Sandwich and said he saw “the store going downhill fast” and “didn’t like it,” so he decided to kick out Le Sandwich and its operator, Mehdi Ben, and give his wife the space for a restaurant.

“My wife is a great cook who always dreamed of opening her own store, so it was an opportunity for her,” Mohamed told ARLnow.com this afternoon. “She’s going to be making Mediterranean dishes and cold and hot hoagies.”

Mohamed said the hoagies will have meats shipped from different cities in Italy, as well as “apple hickory duck prosciutto,” which he described as “expensive, but very tasty.” He said the store will also have a salad bar, and most dishes will range from $7.50 to about $14.

“I think my price compared to my rent and expenses is very fair,” he said. “It’s been 24 years in the retail business, it’s all I know. We want to sell a lot and make a little. I’m not a greedy guy.”

Mohamed said some of the Mediterranean dishes will include rosemary lamb shanks, baked salmon and lemon ginger chicken, which will be served with rice and vegetables on the side. Spice will open at 11:00 a.m. and close at 9:00 p.m. from Sunday to Thursday, and Mohamed said he plans to stay open until 3:00 a.m. on Friday and Saturday nights.

The restaurant will undergo a health inspection this week, according to Mohamed, after which it could open “by Friday or Saturday. That’s when we’re shooting for.”