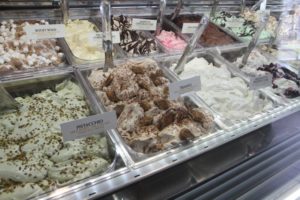 Paciugo Gelato and Caffè is opening in Clarendon this afternoon.

The eatery is expected to open for business at or just after 4:00 p.m. This week Paciugo (pronounced “Pah-Choo-Go,” per a sign on the wall) will be serving gelato, cakes and other desserts, coffee and espresso drinks. Next week, the store plans to introduce breakfast and lunch items, including sandwiches.

The company says their sometimes eclectic gelato flavors (from standards like sea salt caramel or stracciatella to the interesting — but currently unavailable — organic maple caramelized bacon or black pepper olive oil) are made on-site daily. Paciguo is a Texas-based chain, but the owner of the Clarendon store lives in Northern Virginia, we’re told.

The smallest gelato cup or cone starts at $3.99 and can hold up to three flavors. Paciugo is located at 3033 Wilson Boulevard in the former Cafe Wilson/Big Belly Deli space.