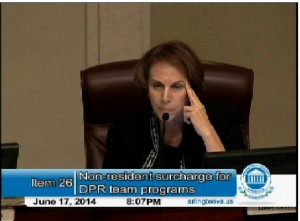 The Arlington County Board voted Tuesday to reverse an increase in the non-resident surcharge for participants of county-subsidized competitive gymnastics and swim teams.

The Board’s FY 2015 budget called for its non-resident surcharge to increase 50 percent. That would have significantly raised annual fees for three clubs: Arlington Aerials, the Arlington Tigers and the Arlington Aquatics Club.

Vocal protests from the teams and impassioned speeches from the youth team members at Tuesday’s Board meeting led the Board to reverse course and even reject a compromise endorsed by county staff. The Board rejected their April decision by a 3-1 vote, and also rejected County Manager Barbara Donnellan’s revised recommendation to reduce the fee increase to 30 percent.

Libby Garvey cast the lone opposing vote, saying that she supported Donnellan’s compromise, while Walter Tejada abstained. Those voting in favor of eliminating the surcharge increase said they weren’t comfortable with the lack of county dialogue with the teams prior to approval of the increase.

The surcharge will now remain at the current rate of roughly 20 percent more for out-of-county participants. 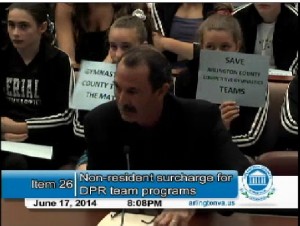 While team members and parents applauded the Board’s decision, Board members questioned whether the county government should be supporting competitive teams in the first place. County staff told the Board that team fees aren’t sufficient to pay for county costs after all facility costs are factored in.

The gymnastics programs utilize the Barcroft Sports and Fitness Center, which is billed by the county as “home to Arlington’s largest gymnastics training center.”

According to Susan Kalish of Arlington’s Department of Parks and Recreation, the overall cost to operate the Arlington Aerials and Arlington Tigers is $473,201, with $221,600 in revenue from the 69 non-resident gymnasts and  $256,250 from the 100 resident gymnasts. Total revenue, at $477,850, slightly exceeds team operating costs, but doesn’t account for the $633,000 in annual facility operating costs at Barcroft.

“The whole issue of us sponsoring elite teams for folks that don’t live in Arlington… does make me really uncomfortable,” Garvey said. “I have to serve Arlington.”

“I’m not sure that the county should be in the business of sponsoring elite competitive teams,” said Vice Chair Mary Hynes, who voted against the 50 percent proposed increase. “The only reason that I’m voting no change is to give us room to have the conversation.”

For some of the increase’s opponents, the issue was not about the government funding sports teams, but about keeping the programs full of participants. Increasing the cost would drive away some out-of-county participants, according to Arlington County Sports Commission Chair Craig Esherick.

“I don’t think we should be willing to get into this area of finding people who are willing to pay for sports programs and gouging them,” said Esherick, who opposed any increase. Esherick said that, while he believes some non-resident charge should remain, Arlington is “too small to support leagues” without participants from other areas.

Donnellan said that, if non-resident participation lessens and decreases the size of these programs, this “allows more floor time for other programs where revenue would be recovered.”