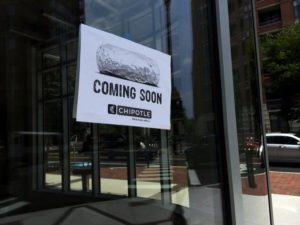 Despite signs posted on ground floor windows at the new 3001 Washington Blvd office building in Clarendon, we’re told that Chipotle is not, in fact, coming soon to the building.

The signs appeared on the windows at the corner of Washington Blvd and N. Garfield Street yesterday. Conspicuously, they were posted on the outside of the windows.

“We don’t have a sign on 3001 that says that… we haven’t been in any discussions with them,” said John Asadoorian, whose firm, Asadoorian Retail Solutions, is handling leasing for the building’s retail spaces. 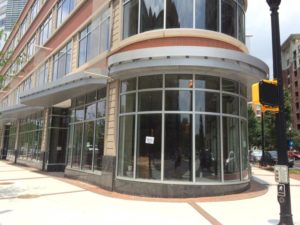 The fake signs have, however, sparked jubilation among some local residents. On the Facebook page of the 1021 Clarendon condominium building across the street, residents who are soon to be disappointed were effusive in their temporary excitement.

“Praise God! I have tears in my eyes,” wrote yet another.

Though it likely won’t generate the same level of Chipotlemania, there is at least one new restaurant coming to 3001 Washington Blvd that should generate some buzz. Citizen Burger Bar is expanding from its original Charlottesville location to a new location at the corner of N. Highland Street and 11th Street. The restaurant specializes in custom burgers and craft beers, but also serves sandwiches, wine and cocktails.

Also planned for 3001 Washington Blvd is a restaurant called “Bowl’d.” The owner appears to be a Donaldson Run resident, but no other information about the restaurant or the type of food it will serve was immediately available.