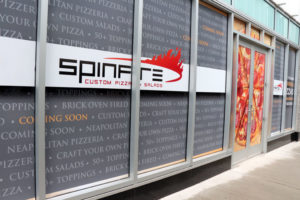 The restaurant, co-owned by Washington Redskins receiver Pierre Garçon and Paisano’s Pizza owner Fouad Qreitem, is on the ground floor of the building that also houses Heavy Seas Alehouse and Roti.

The restaurant will use a rotating oven to cook personal pizzas for customers in less than two minutes, it says in a press release. The 2,300-square-foot eatery will also serve salad, gelato and “a robust beer and wine selection.”

The location will be SpinFire’s second when it opens; there’s another being built in Ashburn, a few miles from the Redskins’ practice facility.

“We are very excited to build our second SpinFire location in Rosslyn with its compelling resident demographics, strong daytime office population, and a true 24/7 live, work and play environment,” Garçon said in the release.

END_OF_DOCUMENT_TOKEN_TO_BE_REPLACED

More Stories
Morning NotesProgressive Voice: A Look Back and a Look Forward