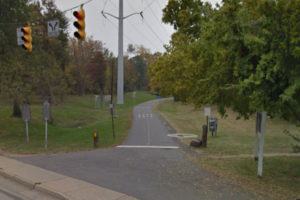 A new “bike park” with a “learner’s loop” is likely headed for the intersection of Columbia Pike and the W&OD Trail.

On Saturday, the Arlington County Board is scheduled to vote on an agreement with the Northern Virginia Regional Park Authority to construct a bike park on the northern side of Columbia Pike near Arlington Mill Community Center. Dominion Power, which has an easement for its power lines, is also party to the agreement.

“The focus of the project is to install a bike park with a learning loop for beginning riders,” the county’s staff report states. “The park improvements will include site furnishings, sand play area, water bottle filler, bike repair station, plaza space and a paved bicycle path.”

The park was approved back in 2009 as part of the Neighborhood Conservation program. The project has “been on hold” as the county’s Department of Environmental Services realigned the trail to improve pedestrian safety and to accommodate streetscape improvements.

Staff has already solicited bids for the project. Once the County Board approves the licensing agreement, a separate proposal with the chosen bid is expected to go before the Board in the fall.