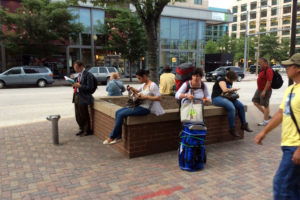 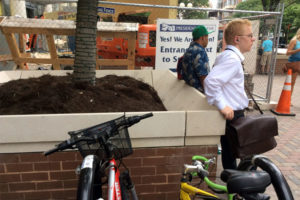 Several planters on the sidewalk of N. Stuart Street in Ballston, just outside the Ballston Metro station were recently rebuilt to stop people from taking a seat.

The planters were replaced by property manager Gates Hudson this month, and while the trees are still there, the flat surface around the soil has been converted into a sharply angled corner designed specifically to prevent people waiting for the buses from sitting down.

“They’re meant to be planters and that’s it,” a Gates Hudson employee told ARLnow.com. “There are many benches outside, and the goal was to have people sit there and not on the planters. A lot of people were loitering there, damaging the plants and leaving trash.”

In a letter to the Arlington County Board, Metrobus rider Jana Lynott said the property owners around the Metro station had “vitriol” for transit riders who are perceived as loiterers.

“As a regular Metrobus 1A rider, I was offended by the insinuation that we riders were viewed as dirty loiterers that bring down commercial property values,” Lynott wrote. “I’m not convinced that my fellow transit riders are a scourge upon society that need to be dealt with through exclusive design… Why in Arlington, VA, a community that invests millions of dollars a year into recruiting new riders to our world-class transit system, would we possibly embrace such a backward notion of transit accessibility? Please. Do not let this exclusive design become standard practice in our community.”