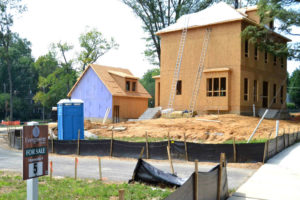 (Updated at 12:10 p.m.) Construction has begun at the new Lacey Lane subdivision at the corner of Washington Blvd and N. George Mason Drive, more than a year-and-a-half after crews first excavated the site in the Waycroft-Woodlawn neighborhood.

Work on the first model home first was expected to begin in March 2013, but didn’t actually happen until a few weeks ago. County employees told ARLnow.com last November that the stall had to do with developer The Barrett Companies fulfilling safety obligations in order to receive permits. County staff confirms the developer met all requirements and obtained a building permit this spring.

According to the Evergreene Homes website, the nine properties will be “exquisitely detailed luxury residences.” Renderings of what the finished homes are expected to look like are also available on the website.

The base models originally were said to feature four bedrooms and 4.5 bathrooms, at an estimated cost of $1.4 million each. Although preliminary plans are available for the three-level houses, Evergreene Homes Director of Sales and Marketing Rich Rudnicki said the company currently is finalizing the home options and base pricing. He said the company should be ready to put the properties up for sale by September 1.

Rudnicki says details like detached garages, courtyards and sitting areas will make this a unique subdivision.

“It’s a cool location,” he said, “It’s going to be a different kind of community.”