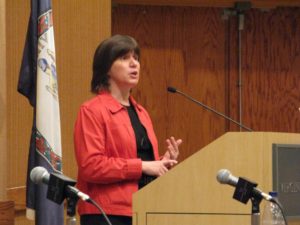 Baird is the second School Board member to resign this summer, following Noah Simon’s resignation on Aug. 1. That leaves the School Board with just three members: Chair James Lander, Vice Chair Emma Violand-Sanchez and Abby Raphael.

“Commitments in both my personal and professional life have put increasing pressure on my time since the beginning of 2014,” Baird said in a press release announcing her decision. “I have worked to balance these commitments, trying to ensure that I dedicate the amount of time to my School Board duties which I truly believe a member must commit in order to perform this role effectively. This is the manner which our Arlington voters are fair to expect. But the time has come that I can no longer do that without great cost to my family.”

Baird was originally elected in 2006 and won re-election in 2010. She has two sons, who are students at Drew Model School and Gunston Middle School, according to her Arlington Public Schools bio.

Lander has yet to decide whether an appointment will be made to bring the Board back up to four members. If he does, APS said it’s possible that Van Doren will be chosen as appointee, since she is the only candidate to have filed.

“We have received Ms. Baird’s resignation with sincere regret,” Lander said in the release. “All of us on the School Board are thankful and appreciative of Sally’s eight years of leadership and dedication as a Board member. She has worked diligently to ensure that Arlington Public Schools provides high quality educational opportunities for all of our students. On behalf of all of the School Board members, I want to thank her for her dedication and service and we wish her well in all of her future endeavors.”

“To ensure that decisions by the Arlington School Board continue to be representative of the community,” Lander continued, “our goal is to see that those decisions made by the Board during this period of transition reflect support by at least three members of the five-member body.”