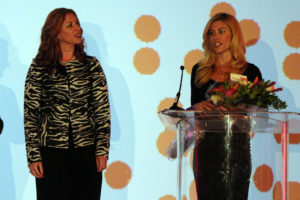 Originally branded as “Casita,” Campos’ project at 1110 N. Glebe Road, next to The Melting Pot, will now be called “SER,” an acronym for “Simple, Easy, Real,” and a play on words with the Spanish verb “to be.”

As part of the Restaurant Challenge prize package, SER received a year of free rent from the building’s owner, Brookfield Properties, and a $245,000 interest-free loan. Campos told ARLnow.com that the restaurant needs “a bit more,” than the loan, so she has launched a Kickstarter campaign for another $15,000.

“The money we raise here [will] be used for the design and renovation of the place,” the Kickstarter says, “for an open kitchen where you can watch the cooking magic happen before your very own eyes, patio furniture… tables, chairs, lighting, a new dishwasher… an indoor herb garden, frames for our walls (with photos of friends, family and neighbors), linens, plates, glassware.”

As of this morning (Wednesday), SER has raised $2,925 of its goal. The fundraising round will close on Oct. 20. Among the perks that donors can receive:

The restaurant will specialize in “authentic, comfort Spanish food that goes beyond tapas,” Campos said in her email, adding that it is planned to be a casual, neighborhood spot, but the food will be “a gastronomical journey and cultural adventure throughout every region of Spain.”

END_OF_DOCUMENT_TOKEN_TO_BE_REPLACED

More Stories
Arlington Pet of the Week: RomeoPeeing Kids Caught in the Act at Penrose Park