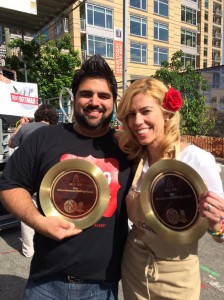 The Ballston Business Improvement District’s Restaurant Challenge is over before its long-promoted “Top Chef”-style cookoff could begin.

Campos will now get to open up shop in the former Red Parrot space at 1110 N. Glebe Road, next to The Melting Pot with a year of free rent, an 11-year lease and a $245,000, interest-free loan from the building’s owner, Brookfield Properties.

Campos and Albisu were selected as the two finalists to compete in a final cookoff this Wednesday evening in the restaurant space that will now become Casita. They were selected from a pool of eight semi-finalists who competed in a judging panel during Taste of Arlington last month, and the two finalists’ selection generated some controversy because of confusion over the selection process.

The restaurant concept that won the most votes from Taste of Arlington attendees, Kristen Robinson’s Laurel, was not named a finalist. Despite Albisu dropping out this morning, Ballston BID CEO said Campos was declared the winner instead of Robinson being invited to the challenge.

“We decided that Casita and Christiana and her team thought they were going up against Victor, and to change that midway and say, ‘Oh we’re not going to award it to you’ and give a chance to someone else, we didn’t think it was the right thing to do,” Leone told ARLnow.com this afternoon. “They have a great plan, team and concept for that location. All the elements were there for a successful venture. We thought that was the best thing to do to award it to her.”

Albisu declined comment on dropping out of the Restaurant Challenge through his publicist. Restaurant Challenge judge and Top Chef alumnus Mike Isabella announced last week that he’d be opening a Mexican cantina, called Pepita, in Ballston, at 4000 Wilson Blvd, last week. Leone alluded to the fact that Isabella’s new venture, expected to open early next year, might have chased Albisu off.

“There were restaurant wars going on, it wasn’t quite the challenge we were putting on,” Leone said. “Things don’t always work out exactly the way you want, but we think this turned out pretty great. It’s a win for Ballston. We’re getting a Mexican restaurant and a Spanish restaurant.”

Campos described Casita on the Restaurant Challenge website as “inspired from the timeless taverns that over generations have been offering very unique, yet typical, classic comfort foods from Spain featuring top-quality and seasonal ingredients. These taverns are known for their hearty dishes and “menus del dia” (a three course meal at a reasonable cost), as well as “pintxos” (essentially snacks on a skewer).”

The Restaurant Challenge was a kind of sequel to last year’s Launchpad Challenge for startup technology companies. While Launchpad was seen as a success, Leone said there’s no certainty that another challenge is in the offing for Ballston. She also pointed out that Restaurant Challenge was the brainchild of Brookfield Properties looking to entice restaurants to its space, not an idea the BID hatched on its own.

There’s no word on when Casita plans to open. Campos will be officially announced as the winner at the BID’s annual meeting on June 23, when she will prepare an array of food as a preview for the restaurant.