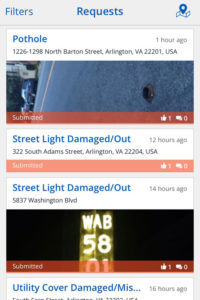 The ArlingtonVA mobile app, which allows residents to report potholes and maintenance problems, among other services, has at least one happy customer.

“Last week, my kids were playing at the new rope park (at Rocky Run Park on N. Barton Street), I noticed a loose bolt on the climbing rope, took a photo, submitted through the [mobile] app and it was fixed within 48 hours,” Clarendon resident Izzy Tepekoylu told ARLnow.com in an email. “Wow! This is how a local government should work! Very impressed. I don’t think I ever thought I’d say this, but this made me feel good about my local taxes.”

The app is available on iPhone and Android devices. It allows users to see pending service requests in their area, check on the requests’ status, and submit their own. Users can also look up what items are recyclable in the county and what aren’t, and view county and Arlington County Police Department press releases.

“I had submitted a bunch of potholes through the app before and all were fixed, everyone should use it, it’s great,” Tepekoylu wrote. “We always write about complaints and what is broken etc., I thought we should also write about the good stuff as well.”

The app doesn’t have any reviews on iTunes, but it has three five-star reviews and two one-star reviews on the Google Play store. The app was updated in July, with a new user interface and a “streamlined request submission workflow.”

In August, there were 151 submissions for service on the from the mobile app, which, along with the web page, was developed by New York City-based tech company Public Stuff.