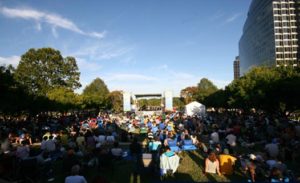 Drivers and cyclists will have some extra obstacles to contend with in Rosslyn and Pentagon City tomorrow.

A number of road closures are planned for the Rosslyn Jazz Festival and the Arlington Police, Fire and Sheriff Memorial 9/11 5K.

The Arlington County Police Department issued the following statement about closures planned for the jazz festival.

Street parking in the area will be restricted. Motorists should be on the lookout for temporary “No Parking” signs. Illegally parked vehicles may be ticketed or towed. If your vehicle is towed from a public street, call 703-558-2222.

For more information on the event please visit www.rosslynva.org.

The annual 5K race, which is scheduled to kick off at 6:00 p.m., will result in the following road closures, according to the police department.

In addition, street parking in the area will be restricted. Motorists should be on the lookout for temporary “No Parking” signs. Illegally parked vehicles may be ticketed or towed. If your vehicle is towed from a public street, call 703-228-4252.