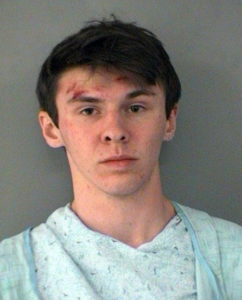 A naked man caused a scare for a driver and a bystander in the Bluemont neighborhood early Saturday morning.

The incident happened around 12:55 a.m., on the 5000 and 5100 blocks of Wilson Blvd. Police say a man, who was “under the influence of narcotics” and not wearing clothing, jumped in front of a car traveling eastbound in the area of 7-Eleven and Pupatella restaurant.

The driver slammed on the brakes and the man “threw himself onto the front end of her vehicle,” said Arlington County Police Department spokesman Dustin Sternbeck.

After jumping on and off the hood of the car, the suspect ran up to a bystander on the sidewalk and tried to pick a fight, Sternbeck said. The suspect then ran off, but was quickly taken into custody by police. While being questioned, he got up and struck several officers, according to Sternbeck.

The suspect, 18-year-old Arlington resident Kevin [Redacted], was charged with disorderly conduct and two counts of assault on a police officer.

Next
Summer Continues With ‘Beach on the Pike’ This Weekend