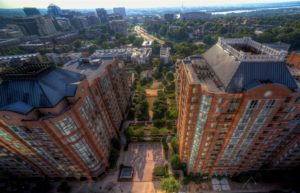 The local furor over Sen. Kirsten Gillibrand’s (D-NY) view of Arlington as a “soulless suburb” has yet to die down.

Within eight hours of our article’s first publication, Gillibrand apologized for the remark (which was buried in the pages of her new book, “Off The Sidelines.”) But that didn’t stop the debate over whether Gillibrand was off-base or on-target in her assessment of Arlington.

Among those weighing in: Ben Adler, a former New Yorker and a writer at the environmental news website Grist.org. Penning a piece for the Washington Post’s online PostEverything op-ed section, Adler said Gillibrand shouldn’t apologize.

Some excerpts from that article:

For one year I worked at an office in Arlington, Virginia. There were virtually no restaurants that were not chains. Everything was crowded at peak lunch hour but completely empty by 3 p.m. and closed by the time I left work.

Kirsten Gillibrand… correctly identified Arlington in her new memoir as a “soulless suburb.” That’s exactly what most of my friends who have lived in D.C. would call it. In fact, when I was recently trying to describe the cultural vacuity of the “Williamsburg Edge,” a new apartment tower in Brooklyn, I called it, “Arlington on the East River.” My friend who lived in Washington laughed knowingly. He required no further explanation.

Arlington… lacks a physical center, a public space like Dupont Circle, where buskers can play music and activists can make speeches. A centrally located, and well-designed park — with facilities for both active and passive recreation such as basketball courts, chess tables, and benches — would go a long way towards giving Arlington a soul. Most important, unlike all of Arlington’s misbegotten little plazas, it has to be designed to draw passersby in and to engage with the streets around it.

That prompted at least one notable D.C. resident to call foul.

“At the risk of defending Arlington (!), isn’t this @badler piece just about Rosslyn, not all of Arlington?” asked Washington City Paper editor Mike Madden, via Twitter.

Perhaps the best judges of whether Arlington County does or does not lack a soul are those who actually live here. So what do you think?

END_OF_DOCUMENT_TOKEN_TO_BE_REPLACED

More Stories
NOVA Legal Beat: Can an Employer Fire Someone for no Reason?Secretary of the Interior to Help Clean Up Roaches Run Thursday