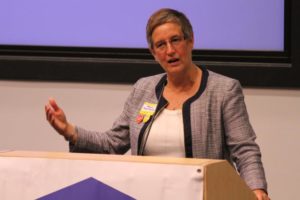 Nancy Van Doren is the newest member of the Arlington County School Board after the Board appointed her in a special meeting this morning.

Van Doren replaces Noah Simon on the Board and will serve her interim turn until the Nov. 4 general election. Van Doren is running unopposed for the seat in the election, and she will be sworn in for her full, four-year term after she wins. Simon resigned this summer to take care of his children after his wife died on Dec. 30, 2013.

Van Doren will fill one of two open seats on the Board. Former Board member Sally Baird also resigned this summer; Barbara Kanninen and Audrey Clement are running to replace her in the Nov. 4 election. Baird originally had announced she wouldn’t seek re-election but would serve out her current term, but changed course and resigned on Aug. 22.

“Nancy is a well-regarded civic leader who has supported the Arlington Public Schools for a decade,” School Board Chair James Lander said in a press release. “Nancy has been highly engaged and is well-informed about the many complexities associated with Arlington’s needs. She will make a tremendous addition to this Board.”

After the jump, the full release from Arlington Public Schools on Van Doren’s appointment:

The Arlington School Board appointed Nancy Van Doren at a special meeting this morning. Van Doren was sworn in immediately after the Board voted and will fill the vacancy which occurred when former Board member Noah Simon resigned his seat on August 1. Her term will conclude when Simon’s seat is filled by special election on Nov. 4, and the newly elected member is sworn in.

Van Doren is an education advocate with 10 years of experience as a parent, volunteer, and leader in the Arlington Public Schools. Prior to joining the Board, Van Doren served as the PTA President at Jefferson Middle School and chaired the Arlington Special Education Advisory Committee. Most recently, she served on the Multi-Modal Transportation and Student Safety Special Committee, the Family and Community Engagement Working Group, and the Arlington Career Center Parent Advisory Committee. Van Doren has also served on the APS Advisory Council on Instruction, the County Council of PTAs, and the ADHD Task Force.

“Nancy is a well-regarded civic leader who has supported the Arlington Public Schools for a decade,” said School Board Chair James Lander. “Nancy has been highly engaged and is well-informed about the many complexities associated with Arlington’s needs. She will make a tremendous addition to this Board.”

Van Doren has extensive business and international experience. From 1984-1995, she worked in the private sector with Connecticut National Bank, The Travelers Companies, The Hartford Courant and Newsday. Her expertise is in general management and communications. From 1996-2004, Van Doren lived overseas with her husband Jack Zetkulic, a Foreign Service Officer. During those years, Van Doren and her family lived in Serbia, Sweden and Switzerland. Previously, she studied at the University of Madrid in Spain and served as a volunteer teacher and community organizer in Nicaragua. She is fluent in Spanish.

For the last decade, Van Doren and her family have lived in Arlington’s Ashton Heights neighborhood. She and Jack have four children, three of whom attend Arlington Public Schools. The oldest, a graduate of Washington-Lee High School, is now a student at the University of Virginia. Van Doren is a graduate of Georgetown University’s School of Foreign Service and holds a Master’s Degree in Management from the Hartford Graduate Center/ Rensselaer Polytechnic Institute.