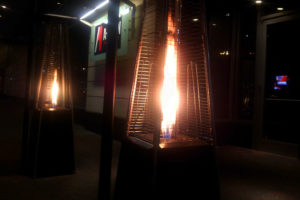 A-Town Bar & Grill could have its permit for live entertainment and dancing renewed this week, the next chapter in its tenuous relationship with the Arlington County Board and staff.

Thanks to a reduction in noise complaints, County Manager Barbara Donnellan has recommended the Board approve renewal of A-Town’s permit, with another county staff review in three months and another Board review in six months.

“Residents in the community have stated to staff that the site plan condition, which restrict the permitted hours the outdoor cafe can be in use, has significantly cut down on noise-related disturbances,” the county staff’s board report states. “However, disturbances related to overcrowding and over-serving of alcohol still have a negative impact on adjacent properties.”

County staff specifically mentioned an incident during the World Cup final on the afternoon of July 13, when the restaurant was found to be over capacity by “at least 100 people” and Virginia Alcoholic Beverage Control agents “found a truck, parked on the patio, dispensing champagne to the crowd without the proper licenses to do so.”

The County Board last approved the permit’s renewal three months ago, with conditions on limiting the times at which patrons can be on the outdoor patio. The restaurant also planned to install “theater-style curtains” on the patio to reduce noise after the Board’s December use permit review, which saw several residents of the surrounding area complain about the noise the bar was generating. However, A-Town opted to simply close the patio area early instead of putting in the curtains.

A-Town is still waiting for the results of a Virginia ABC Board hearing for a February incident in which, at an employee-only party, police say one man slashed another with a broken beer bottle in the face and neck.

County staff said A-Town gets more police calls than any other “liquor-serving establishment,” with or without live entertainment, in the Ballston area. It also “continues to have issues with compliance with local and state laws and regulations.” The situation has improved since the June decision to close the outdoor café at midnight on Fridays and Saturdays and even earlier during the week, but the County Board could still revoke the live entertainment permit at its meeting this Saturday.