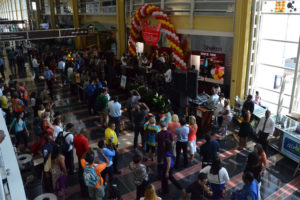 Reagan National Airport is not done adding outposts of popular D.C. restaurants; El Centro, Cava Mezze Grill and Lebanese Taverna are among the eateries expected to open by next summer.

“From the beginning of the Concessions Redevelopment Program at Reagan and Dulles, the Airports Authority has been committed to enhancing the passenger experience at both Reagan and Dulles,” Steve Baker, MWAA’s vice president of business administration, said in a press release. “Whether passengers are looking to recharge themselves or their cell phones, we are providing bright, enticing opportunities with exceptional service for our customers’ shopping and dining pleasure.”

In addition to the new food options, MWAA is planning to overhaul three food courts, at Terminal B (gates 10-22), Terminal B/C (gates 23-34) and Terminal C (gates 35-45). Each food court will offer “grab and go snacks,” alcohol and express eating options, like Say Si Bon Gourmet Market, crêpe shop Magic Pan and Asian shop Wow Bao. The food courts will be similar, MWAA says, to the larger redevelopment that is underway at Terminal A.