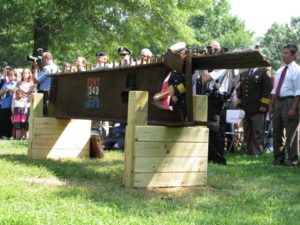 A motorcade carrying an I-beam from the World Trade Center could have some traffic impacts in Arlington over the weekend.

The I-beam, accompanied by a motorcade that will include a New York City fire engine, is expected to transported down the HOV lanes of I-395 Saturday afternoon. It will travel through the District, then Arlington, en route to the Marine Corps Museum in Triangle, Va.

From the Virginia Dept. of Transportation:

Motorists on I-95 can expect delays on Saturday, Oct. 4 due to a massive motorcade transporting an I-beam from the World Trade Center to the Marine Corps Museum.

The I-beam will be escorted by a New York City fire truck, with an estimated 500 to 1,500 motorcycles and support vehicles accompanying the truck. The convoy will enter Virginia from Washington, D.C. via the I-395 HOV lanes at approximately 3:30 p.m. Saturday. It will follow the southbound HOV lanes to a stretch of the new I-95 Express Lanes near Dumfries and use a new flyover ramp to merge onto the southbound I-95 regular lanes and exit at Joplin Road (Exit 150). VDOT will close the right regular lane of I-95 South near the merge and close the Joplin Road exit ramps in both directions.

Motorists will have two regular lanes in the area of Joplin Road and can expect traffic delays from approximately 3 p.m. to 6 p.m. Motorists should also expect delays on Route 1 when the motorcade is traveling from Joplin Road to the museum.

The I-395/95 HOV lanes were already scheduled to be closed for 95 Express Lanes construction, beginning at 11 p.m. Friday, October 3 through 8 a.m. Sunday, October 5. The contractor, Fluor-Lane, will clear construction in the lanes Saturday afternoon to accommodate the motorcade. The HOV lanes will reopen in the northbound direction by 8 a.m. Sunday.

Fluor-Lane accelerated the opening of the flyover ramp to accommodate the motorcade and avoid the complete closure of I-95 that otherwise would have been required.

As seen above, the Arlington County Fire Department was presented with a steel beam from the World Trade Center in 2010.