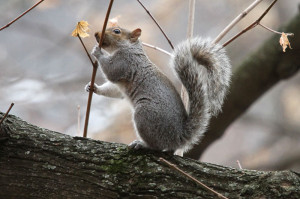 A sure sign autumn has arrived is the number of squirrels scampering around the county collecting nuts. But residents in many parts of Arlington will notice a lot less squirrel scampering than in years past.

It appears most parts of the county have fewer squirrels this year. Arlington County Natural Resources Manager Alonso Abugattas confirms that from spring through October — although no hard numbers yet are available — there have been “reports of fewer squirrels and anecdotal evidence” of a smaller population.

Abugattas said although many people immediately point to last year’s cold winter as the culprit, that’s probably not directly the cause. He said it would be very unlikely for large numbers of squirrels to die here by freezing to death.

“These animals, squirrels and so forth, if they have an adequate food supply, their little motors can keep them going and they can survive. If they have food they can keep their metabolism up and the cold won’t affect them as much,” he said. “Remember, we have squirrels way up in Canada, so they’re used to that weather. These animals are remarkably resilient.”

A more likely scenario, according to Abugattas, is that last year’s small acorn crop negatively affected the squirrel population. Many squirrels probably struggled to find adequate food with the decrease in acorns, but the problem is very localized. Certain neighborhoods where the animals managed to find other sources of food — such as bird feeders or berries — didn’t see the sharp decline other neighborhoods experienced.

Because it is the beginning of the season, so far the robustness of the 2014 acorn crop is not known. Researchers have begun analyzing acorn production but won’t have a better idea of the crop specifics for another couple of months. It’s something naturalists are paying close attention to due to the amount of wildlife that oak trees support.

“I don’t think I’ve come up with a more important tree in our woods, as far as its importance to wildlife,” said Abugattas. “More than 600 different species depend on oaks. Caterpillars, birds, bears, turkeys, deer.”

And of course, the squirrels. Although this year seems to have been an overall down year for the local squirrel population, Abugattas offers a reminder of how quickly it could see a resurgence.

“Squirrels are rodents, so like other rodents they can reproduce fairly quickly. If they have an adequate food supply they can reproduce twice or three times per year,” he said. “In fact, we’ve probably just had another batch born. Again, it’s all anecdotal at this point, but we could see the population bounce back in many areas rather quickly.”