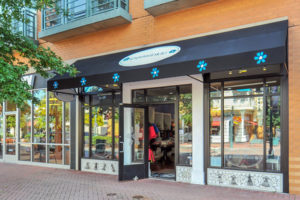 Periwinkle, a women’s clothing boutique in the Village at Shirlington, plans to close at the end of the year.

The shop, at 4150 Campbell Ave., is owned by Elizabeth Mason, who said she has decided not to renew her lease after being in the location for five years.

“Business is down and rent continues to go up, but it was always going to be a 5-year deal, the option to renew was never going to work for me,” Mason told ARLnow.com via email. “The landlord and I did discuss if I wanted to renew, but they wanted too much rent and as I said, this year sales have been down so it worked out to just let the lease end.”

Periwinkle also has a location in Old Town Alexandria, which Mason said is closing in November when her lease is up there. She plans to focus on Periwinkle’s online shop, her affordable online shop The Pink Armoire, and finding a new retail space in the area.

Periwinkle is the third storefront to close in the Village at Shirlington in the last two weeks, following Bloomers and Aladdin’s Eatery. Mason said “business is down” while a Bloomers employee told ARLnow.com the store may have shut down due to “a lack of foot traffic.” A manager in a nearby store told ARLnow.com that both companies have no one to blame for their closing but themselves.

“Bloomers always struggled in its execution,” the manager, who wished to remain anonymous, said. “The average female doesn’t look for lingerie and bras on the sidewalk. Periwinkle has struggled in the past year, but I heard from customers it’s because of the shop’s pricing and sizing.”

The manager, who said she had worked in the Village at Shirlington for more than five years, said foot traffic in the shopping and restaurant district has rarely been better.

“Shirlington has great foot traffic,” the manager said. “People never used to come to the side of the village with Bloomer’s and Periwinkle because they didn’t know it was there. It’s just been getting better and better over the years.”