The stretch of Wilson Blvd between N. Frederick and Manchester Streets is planned to be reduced from four lanes to three next spring.

The change has been advocated by the Bluemont Civic Association (BCA) for years, and the neighborhood’s representatives have posited that the lane reduction, coupled with sidewalk expansion, will make the corridor more walkable without increasing traffic congestion.

The project, which Arlington County says is in design phase with reconfiguration set for spring 2015, will reduce westbound and eastbound traffic to one lane each, while adding a center lane for left turns and bike lanes on either side of the street. The plan also calls for consolidating bus stops in this stretch to reduce possible congestion.

Currently, there are no funded plans to expand the sidewalks.

County staff is holding a general community meeting on Nov. 20, from 7:00 to 9:00 p.m., at Arlington Traditional School (855 N. Edison Street), to discuss the plans. The county also plans for a “robust community notification process throughout the corridor,” before the restriping and repaving work begins.

The plans to reduce the lanes on Wilson Blvd was initially recommended by the BCA’s Sidewalk Safety Task Force and supported by the BCA in October 2012. Arlington decided to incorporate the plans when it made its restriping and repaving calendar for this year. 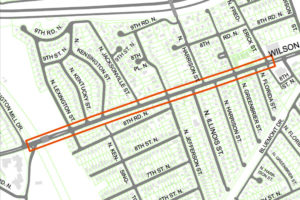 “We are grateful that Arlington County is listening to us and working to make our ‘Main Street’ a safer and more pleasant place for all residents and visitors,” BCA President John Lau said in a press release. “Working together, the efforts of neighborhood residents and county officials have led us to this long-awaited first step for improving our neighborhood and an important Arlington corridor.”

While the county approved the requested changes to Wilson Blvd’s lane configuration, the BCA’s requests to have the power lines — with poles located on Wilson Blvd’s sidewalks — moved underground was deemed prohibitively expensive by the county. The BCA is also hoping that the improvements be extended for all of Wilson Blvd west of N. Glebe Road, something county staff said it will continue to explore.

“This is a demonstration project that will be monitored further by the County to determine whether a complete streets project — currently unfunded — is viable along the entire section of Wilson Boulevard, west of North Glebe Road,” the project website reads. “If successful, staff will continue to work with the community to develop this future potential project.”

The plan, when it was being discussed last June, received some concern for businesses located along the corridor. The sidewalk task force reported businesses were “extremely concerned” that reducing the number of lanes would “gum up traffic to the point where they would lose business.”

The BCA cited the stretch of Washington Blvd west of N. Glebe Road, which goes from four lanes to two and has higher peak traffic volume, as an example of why the Wilson Blvd proposal won’t significantly worsen traffic.