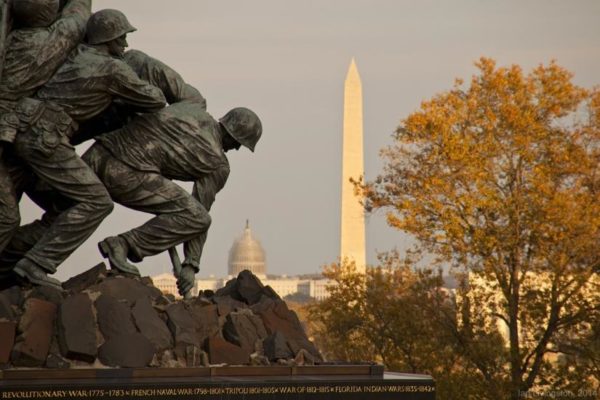 Arlington Warns of ‘Potential Severe Traffic’ — Arlington County is warning residents about “potential severe traffic” today due to the massive crowds expected for the Concert for Valor on the National Mall, along with Metrorail service changes and numerous road closures in D.C. that are in place for the Veterans Day event.

Cherrydale Abuzz Over Sound Check — The Cherrydale community email listserv was “going crazy with complaints about the sound check” for the Concert for Valor last night, a tipster tells ARLnow.com. We’re told the neighborhood could hear bass and feel vibrations from the sound check. “One person reported that the Arlington County police were getting so many calls they were telling people to call the D.C. police who then told people to call [U.S.] Park Police,” the tipster said.

Cost of Thanksgiving Dips in Va. — Virginia families will save about $5 per person this year on Thanksgiving dinner thanks to lower food prices, according to the Virginia Farm Bureau Federation. [InsideNova]

Lyon Park ‘Sewer Justice’ Petition — A group called Arlingtonians for Sewer Justice — which represents 11 Lyon Park households that are being compelled to pay $10,000-20,000 for a new sewer connection because the county says it will no longer maintain a failing, private sewer line behind their homes — has created a new petition. The petition, which has so far gathered 95 supporters, calls for Arlington County to pay for the upkeep of privately owned sewer lines via a bond referendum. [Change.org]