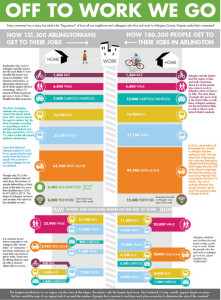 The way Arlington residents commute continues to change, with more working remotely than at any point in the last decade, according to a new study.

The study, tabulated in infographic form (left) by county-funded transit research organization Mobility Lab, used 2013 data to analyze the commuting habits of of 131,300 working Arlington residents and the 180,300 who work in the county.

According to the study, 7 percent of all commuting trips by Arlington residents are either on foot or with a bicycle, and 4 percent of Arlington workers report either walking or biking to work. While 7.4 percent of commuting trips were biking and walking in the previous study, conducted in 2010, Mobility Lab Research Director Stephen Crim told ARLnow.com that he believes the 576-resident sample did not represent the county’s changing commuting patterns.

“We looked at this in comparison to census figures, and the census is showing really strong growth [in walking and biking] between the 2013 community survey and the 2010 community survey,” Crim said, “so we think there is an increase, but the sample didn’t pick that up.”

The longer term trend is clear: in 2004, only 4 percent of county residents biked or walked to work, and only 2.8 percent arrived at their jobs in Arlington via bike or foot.

The number of Arlington residents that drive alone to work is virtually unchanged — from 55 percent in 2010 to 54 percent last year — and hasn’t decreased significantly over the last 10 years, despite local officials’ emphasis on the “Car Free Diet.” Crim said that transit advocates should not be discouraged, however.

“A few percentage points over that period I’d say is real progress,” he said. “For Arlington residents, it’s a kind of hard argument to make because a lot of them are not going that far to work. Satisfaction across all the different modes is about the same. It’s that much more difficult sometimes, to make the argument, when someone still owns a car to not use it for work. They might have to drive a short distance or not get on a crowded interstate, so it’s a real challenge for all of Arlington’s programs.”

Compared with other jurisdictions around the region, Arlington’s residents lag behind only the District’s in alternative modes of transportation to driving. The regional average for those who drive alone to work is close to 70 percent, but only 38 percent of D.C. residents drive solo to the office.

Arlington residents’ use of Metrorail took a slight dip, from its peak of 27 percent in 2010 to 26 percent last year. The number coincides with the region as a whole; according to Mobility Lab, Metro’s ridership has been in decline since 2009.

The biggest statistical shift in working patterns comes from employees teleworking. In 2004, only 13 percent of Arlington residents said they teleworked at any point during the week. In 2013, that number is 30 percent, with the respondents teleworking on average 1.3 days per week. In addition, 19 percent of Arlington residents said they can’t telework at their current job, but “could and would” if the option were available to them.