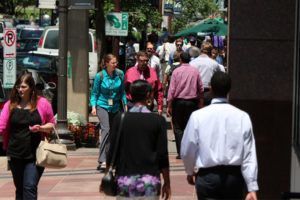 Arlington is considering adopting a plan to incorporate design guidelines, best practices and incentives to increase retail activity throughout the county.

The Arlington County Board will discuss a proposed update to the 2001 Retail Action Plan, which covered the Rosslyn-Ballston corridor. The update expands the plan’s footprint to the Crystal City and Columbia Pike corridors, includes recommendations to improve the county’s retail environment and asks the Board to change regulation to allow for retail growth.

“This is a big deal and this has taken a long time to work through,” County Manager Barbara Donnellan told the Board. “This is a report that will guide us for many years to come on how we’re going to move forward. Retail will succeed where it can thrive.”

The Virginia Department of Taxation reported more than $2 billion in retail and food and beverage sales in Arlington last year, but the opportunity is there for much more local retail spending, the plan states.

“The estimated demand for retail and food and beverage is in excess of $4.7 billion dollars,” the report states, citing data from the Bureau of Labor Statistics Consumer Expenditure Surveys. “With a demand greater than sales, Arlington is considered to have a leakage of retail opportunity — customers must travel outside of Arlington to purchase many goods and services — in most broad retail categories.”

Among the key recommendations are developing design guidelines to make “retail look like retail,” developing a specific retail map to guide which kinds of retail businesses should go where — encouraging clustering of specific types of retail to draw in more customers — and encouraging public art and accessibility.

Stores should be encouraged to design their exteriors creatively, the plan says, and to “design storefronts for three miles an hour (pedestrian speed) rather than 35 miles per hour (vehicular speed).” That’s a bit of a departure from years past, when retail signage rules were more stringent in Arlington, discouraging retailers from standing out too much. For interior design, the plan advocates for higher ceilings on the ground floor of buildings and to ” to allow for maximum flexibility and use of the space.”

The draft plan also recommends softening regulations on food trucks and other mobile vendors. It says “vending zones” are under consideration in Rosslyn, Courthouse and Ballston, which would allow food trucks to park for more than two hours at a time.

“With social media and serial followers, vending can help pull customers into different areas,” the plan says. “Establishing vending zones, to allow trucks to vend for longer than two hours or for alternative hours, can help prime an area that is not quite ready for retail or can attract people to other uses — parks, cultural venues or other businesses.”

Grocery stores are seen as a key component of Arlington’s retail plan, as they serve as anchors for retail districts. The plan generally lauds the Arlington County Board for its flexibility in approving grocery stores, including most recently the store planned at 1401 Wilson Blvd, whenever the property is redeveloped. However, it says the term “grocery store” should be more clearly defined for administrative purposes. “The policy should clearly articulate how and when incentives or mechanisms to support the construction of a grocery store are applied,” according to the plan.

Many of the actions the plan suggests include amending the county’s Zoning Ordinance and special exception policies to factor in broader retail goals. It’s those changes that gave some of the County Board members pause and led them to schedule a work session in January, before the plan is up for a vote in February.