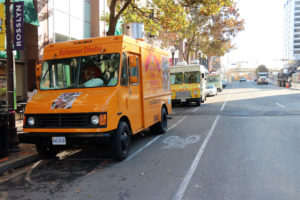 (Updated at 3:20 p.m.) For the past two weeks, officers with the Arlington County Police Department spent the lunch hour issuing parking tickets to food trucks and other vehicles along N. Lynn Street in Rosslyn.

The increase in enforcement, according to ACPD spokesman Lt. Kip Malcolm, came after the police received complaints that the trucks were parking illegally beyond the two hour limit in the metered spots.

“They weren’t just writing parking tickets to the food trucks, they were writing tickets to all vehicles,” Malcolm told ARLnow.com. Officers from the Rosslyn district conducted meetings with the vendors about the parking situation. “Officers spoke with and warned food trucks about all the laws there.”

Malcolm said one food truck owner agreed with the enforcement. The vendor told police “it had to be done, the saving spots in overnight parking was getting out of hand,” Malcolm said. Not all food vendors that frequent Lynn Street — one of the busiest spots in the area for food trucks — think the enforcement is a good idea.

Maireni Melo, who works on Brandon’s Little Truck, strongly objected to the enforcement.

“They’re enforcing the two-hour parking limit, but they’re checking on vendor’s licenses and everything while they do it,” he said.

Brandon’s Little Truck was stopped from selling last week because of licensing issues, but they were back open for business today (Monday) for lunch. Melo sold out by 1:30 p.m., he said, and the line for the truck formed before the window even opened.

“We’ll just keep feeding the meter, even if there’s a limit,” he said. “We can afford a ticket. If you’re going to get a $35 ticket, that’s just a little more than three sandwiches.”

Che Ruddell-Tabisola, the executive director of the DMV Food Truck Association, said there’s been some confusion over whether trucks need to move after the two-hour limit on Lynn Street expires.

“Different enforcement officers have different answers,” he said. As for the enforcement campaign, spurred by complaints, Ruddell-Tabisola said similar situations have popped up around the area about the brick-and-mortar businesses complaining. “We’ve had situations where established brick-and-mortars oppose innovation and variety.”

“In the past complaints prompted enforcement, and if that’s the case here, I think that’s unfortunate, because food trucks  are really good for the community,” he continued. “Food trucks are job creators, we contribute to the tax base, and ultimately we contribute to these vibrant commercial centers. You really want to have a dynamic mix of commercial and retail, different dishes, different price points. You want a mix of everything so everyone can benefit from it.”

The parking issue may soon be a thing of the past, however. As part of the Retail Action Plan the county will consider next year, food trucks may be able to vend from dedicated vending zones, including in Rosslyn.

“With social media and serial followers, vending can help pull customers into different areas,” the proposed Retail Action Plan states. “Establishing vending zones, to allow trucks to vend for longer than two hours or for alternative hours, can help prime an area that is not quite ready for retail or can attract people to other uses — parks, cultural venues or other businesses.”

Ruddell-Tabisola called Arlington “a real leader” in food truck policy. Malcolm said ACPD’s enforcement was for “a two-week evaluation,” but if vehicles continue to flout the law, police may consider another ticketing crackdown.