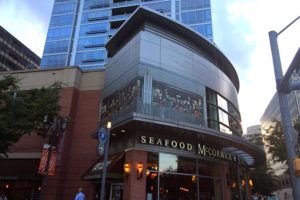 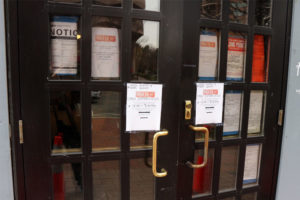 Highline, the new Crystal City bar from the owners of CarPool in Ballston and the Continental in Rosslyn, is taking the last steps before an anticipated early January opening.

The bar applied for a live entertainment and dancing permit, which the Arlington County Board is set to review on Saturday, laying out plans for “musical ensembles, solo performers, deejays, karaoke, and comedians” to perform nightly until 2:00 a.m. County staff has recommended approving the permit with conditions that amplified music be limited to Thursday, Friday and Saturday nights, when all windows and doors to the outside are closed.

Highline conducted open job interviews last week, and co-owner Peter Bayne told ARLnow.com “we had a lot of people show up, more than we ever expected.” The stack of applications is pretty full, but the bar “isn’t going to turn away a rock star,” he said.

The picture of the offerings for patrons is also starting to become a little clearer. Highline will have side-by-side pop-a-shot games as well as a “full shelf” of board games old and new. There will also be arcade games and, a month or two after opening, a new, high-tech gaming table.

“It’s an interactive game table with an LCD TV as the surface and Xbox Kinect cameras overhead,” Bayne said. “You can play games like tic-tac-toe or air hockey just by moving your hands above the table.”

The bar will also have 36 beers, a few wines and a “pre-mixed cocktail” on tap. Bayne also plans to incorporate some barrel-aging and other creative ideas around the libations. “We’re going to have a lot of fun with the beer program,” he said.

“This is definitely one of the more beautiful bars we built,” he said. His company, Bedrock Bars, co-owned with Geoffrey Dawson, owns 24 bars and restaurants, largely in the D.C. area. “I think Crystal City is going to love it.”