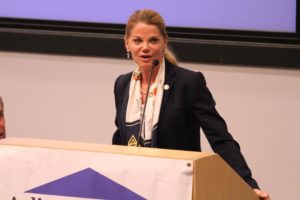 They would almost certainly get returned, given that the former Democratic donor is a convicted sex offender and has recently been in the headlines for claims that he used underage girls as sex slaves, with Britain’s Prince Andrew named as a potential beneficiary.

So why did Gwendolyn Beck, a long-shot independent candidate for Congress in Virginia’s 8th District last year, receive what appears to be Epstein’s only political donations of 2014, totaling $12,600?

Beck — a Rosslyn resident who used to work in the financial industry — tells ARLnow.com she simply asked a number of billionaires in her Rolodex for donations, and Epstein was one of them.

“I did call every billionaire I know to ask for campaign funds, and Mr. Epstein sent the donations,” Beck said via email. “I haven’t spoken with him personally in years. During my years at Morgan Stanley (started in 1995), I managed a portion of his investment funds (about $65 million), and knew him personally. While the press has tagged him ‘a man of mystery’ because they can’t explain how he made his money, it’s mostly a combination of real estate and complex derivatives.”

Beck continued: “At the time, he had a girlfriend he was very close to, and was a hardworking, thoughtful man (he comes from a poor background and made a lot of money really fast). I think he went off the deep end when she left (I left Morgan Stanley by this time and had no relationship with them), and got involved in very bad behaviors which he’s sought therapy for and paid his time in jail.”

Beck, who ran on a platform of being “financially responsible, socially inclusive,” said her decision to accept the cash — given to her campaign and two PACs she controls — “is a question of forgiveness.”

“Did voters forgive Marion Berry, etc. – the list is long,” she said. “I am deeply opposed [to] and shocked by his behavior, but he has paid his debt to society. Although humanly flawed, he can be a great asset to our nation because he understands finance on a level most people can’t comprehend.”

Beck finished a distant third in the November general election, with 2.7 percent of the vote, to 31.7 percent for Republican Micah Edmond and 63 percent for the winner, Democrat Don Beyer. That’s despite other large donations to her campaign coffers from a number of other wealthy, notable people.

Beck said they all supported her centrist message.

“They all believe in our Fiscally Responsible, Socially Inclusive message and that Congress needs at least one independent,” she said. “This bipartisan fighting needs to stop. Mort Zuckerman and Richard Kramer have interests in VA08, believe in our message, and think I should continue to get a voice for independents. Mr. Albrecht is a ‘like-minded’ wealthy family friend who was helping me.”

Career-wise, Beck was a sales manager for the now-defunct Eastern Airlines before transitioning to the financial industry in the 1990s, working for firms like Credit Suisse and Morgan Stanley. A few years ago, she wrote a book, Flirting with Finance, which teaches finance through romantic stories. She was photographed attending a state dinner in 2010 with Sen. Robert Menendez (D-N.J.), as The Smoking Gun pointed out yesterday.

Most recently, Beck said she has been volunteering in Arlington, studying for a master’s degree in gerontology from George Mason University and working as an analyst for an investment firm. As for future political plans, she said she was still contemplating her next move.

“Not sure at this point,” she said. “I do believe Congress needs more ‘centrist’ independents and that our country would be better served with their voices being heard.”