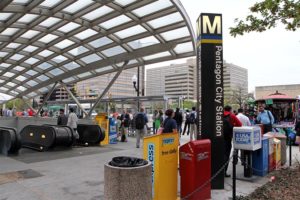 (Updated at 6:50 p.m.) Yellow Line Metro service has been suspended due to heavy smoke in the L’Enfant Plaza Metro station.

According to Arlington scanner reports, a Yellow Line train is disabled somewhere between the L’Enfant and Pentagon Metro stations. Medics responded to the Pentagon station due to reports of at least one person having difficulty breathing on the train, but the train is being evacuated in D.C. (photos below) and Arlington units have since been released.

A “mass casualty incident” was declared and rescues were being made at L’Enfant, according to the D.C. firefighters union. The mass casualty designation is likely due to the riders stuck on the disabled train, inside a smoke-filled tunnel. The fire that was the source of the smoke has since been extinguished.

Metro General Manager Richard Sarles told NBC 4 Tuesday evening that dozens of people have been taken to the hospital, including two people who are in critical condition at George Washington University Hospital. One person died as a result of the incident, Sarles said.

During the incident, Arlington firefighters responded to an electrical room at the Rosslyn Metro station for a report of smoke. It’s unclear if that smoke might have traveled through the tunnels from L’Enfant or is the result of a separate incident. Units on the scene say there’s a smell of smoke but no evacuations are necessary.

That was easily the worst metro ride of my life pic.twitter.com/a5EnGeRzMQ