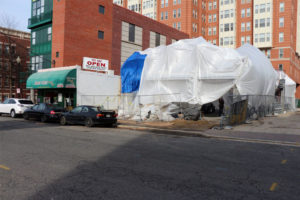 The construction site next to Nam Viet on N. Hudson Street in Clarendon is the future home of a North Carolina-based pizza chain.

Brixx Pizza is planning on opening its second location in the D.C. area in a new building next to the alleyway behind CVS. The site is owned by Gene Roberts, who also owns the CVS, and is already under lease to Brixx Pizza.

The restaurant will be the building’s sole occupant and take up 3,700 square feet of space, Roberts told ARLnow.com this afternoon. Roberst is looking at a mid-summer opening.

“I was very impressed with [the owners] when I met them last year,” Roberts said. “It’s good pizza.”

The business offers carryout but not delivery, and its focus is on sit-down customers at the restaurant. The location is expected to serve beer and wine, and, according to the chain’s website, it has a “Masters of Beer Appreciation” loyalty program and offers several craft beer options.

Brixx hopes to distinguish itself from the Clarendon pizza scene already occupied by Goody’s, Pete’s Apizza and Bronx N.Y. Pizza.