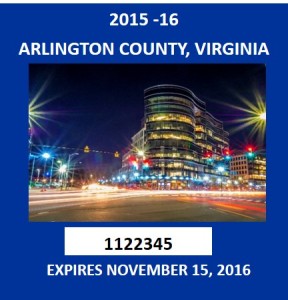 A Yorktown High School junior has won the county’s annual vehicle decal design contest for his nighttime photograph of an office building in Ballston.

Tommy Casey’s decal, entitled “A Nod to History,” was voted the winner by Arlington residents, who chose from four finalists that were announced in December. The decal is named in recognition of the design of the 10-story 800 N. Glebe Road office building, which itself is a nod to to the former Bob Peck Chevrolet dealership that the building replaced.

Later this year the decal will be mailed to residents and placed on windshields of more than 160,000 vehicles in Arlington County.

The scene is a nighttime photograph of a distinctive 10-story building in Ballston, owned by the JBG Companies. Casey, a senior at Yorktown High School, creatively retouched the picture with dynamic lighting and light streaks to show more vibrancy. In his Decal Competition application, Casey wrote, “I wanted to create a photo that represents the modern city that Arlington has become while recognizing the importance of Arlington’s landmarks. The building at 800 North Glebe Road symbolizes this by incorporating the old Bob Peck Chevrolet dealership diamond design into its modern front.”

Panel reviewed 114 entries The competition’s 114 entries were narrowed down by a panel of Arlington residents. “Our Citizens’ panel worked diligently to pare down the submissions to just four finalists. This was not an easy task considering how many great entries were received,” said Treasurer Carla de la Pava. The four finalists were put to a County-wide vote conducted over a six-week period during which 2,913 votes were cast online and by mail. Casey’s design came in first.

Thanks to the generosity of John Marshall Bank, each of the finalists received a cash prize. As the winner, Casey received $750 and the others each received $500.

The other finalists were:

Arlington began requiring local licensing of vehicles in 1949, which took the form of a metal tag attached to the license plate. The first windshield decal was issued in 1967; decals were first produced with a color image in 2000. In 2002, residents were given the opportunity to vote on the decal image, and in 2005 the Treasurer’s Office started the Decal Design Competition for high school students.