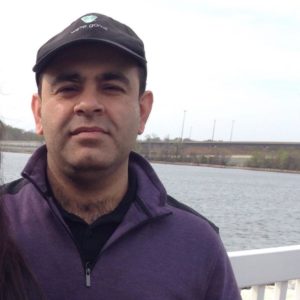 Friends and coworkers of a man critically injured in a parking lot hit-and-run on Columbia Pike are raising money to help his family.

Noormustafa “Noor” Shaikh, a 40 year old Stafford, Va. resident, was still in critical condition as of Friday afternoon, we’re told. He suffered numerous injuries last Tuesday when a Fairfax woman allegedly ran him over with her SUV, as he tried to prevent her from leaving the parking lot of his automotive business on the 3600 block of Columbia Pike.

Alexandra Mendez, 39, was arrested the next morning and charged with aggravated malicious wounding. She was also charged with hit and run for allegedly striking two cars in the parking lot, which prompted Shaikh — a co-owner of MK Auto Sales and Service — to try to stop her from leaving.

Shaikh was run over by the SUV’s tires and suffered at least eight significant injuries — including multiple rib fractures, liver laceration, bruised lungs, a leg fracture, spine fractures and facial fractures — according to a family friend who contacted ARLnow.com but did not wish to be identified by name.

“He’s awake and aware but can’t talk because he’s on a respirator full time,” the friend said of Shaikh’s condition. “He still has to undergo more surgeries.”

A group of friends and coworkers have set up an online fundraising campaign for Shaikh, who is better known by his nickname, Noor. So far the “For Noor” GoFundMe campaign has raised $895, but it is seeking more money to help provide for Noor’s wife and three sons.

Said the friend: “His wife, Durdana, is trying to keep his spirits up. She tough and hanging in there. She [is] with him all day… always keeping a watchful eye on him. As for the kids they are aware he was hurt, but they do not the extent for his injuries. Makes it easier for them. They all keep asking when their dad is coming home.”