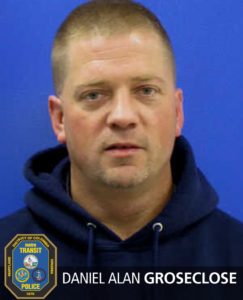 A Maryland man who worked for a Metro maintenance contractor has been arrested and charged with stealing items from a Rosslyn construction site.

Police say 42-year-old Daniel Groseclose of Edgewater, Md. was employed by Kone, a company that does elevator and escalator repair work for Metro, when the thefts were discovered. He’s accused of stealing copper that was located on a construction site near the Rosslyn Metro station. The copper was owned by the electrical contractor M.C. Dean.

“It is alleged that on at least two occasions last fall, Groseclose stole sections of copper wire and tubing from the site,” Transit Police said in a press release. “Kone was cooperative with the investigation, and has advised Metro that they have since dismissed Groseclose as an employee.”

“Groselose was arrested by Anne Arundel County Police on MTPD’s arrest warrant in Virginia,” the release continued. “He is expected to face two counts of grand larceny once extradited to Arlington County.”