Nearly 20 cars were broken into in the Rosslyn area over the weekend.

According to police, the front passenger side window was smashed and items were stolen from at least 14 cars in a parking garage on the 1600 block of Clarendon Blvd. The break-ins happened early Saturday morning. 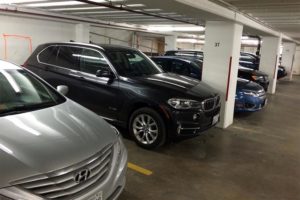 Early Sunday morning, another five cars were broken into around the 2200 block of N. Scott Street. “Numerous items” were stolen.

These break-ins followed a series of 17 car break-ins in Rosslyn during the prior weekend, in which passenger side windows were also smashed.

Police told NBC 4 (above) that the break-ins may be related but so far they haven’t been able to catch the suspect or suspects on surveillance camera. The thieves are looking for small items of value that can be easily concealed, so one way to protect yourself is to remove any such items from your car when leaving it parked overnight.