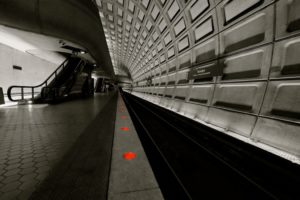 (Updated at 9:30 p.m.) Firefighters responded the Rosslyn Metro station Saturday night for a report of smoke in the tunnel between Rosslyn and Foggy Bottom.

As of 9:00 p.m., Arlington firefighters were being told that the fire was closer to the Rosslyn station and firefighters prepared to enter the tunnel with Metro maintenance personnel.

Firefighters have not seen any sign of smoke, and as 9:20 p.m. it was determined that the fire was extinguished after power was cut to the third rail. Arlington fire units are now being put back into service.

*UPDATE* Rosslyn Metro. Fire is out. Releasing all units.

According to earlier scanner traffic, trains were single tracking outbound to Virginia through the tunnel, but are not currently running inbound. With Metrorail service suspended over the Yellow Line bridge due to snow and ice accumulation, that meant that no Metro trains were running from Virginia to the District.

As of 9:15 p.m., Metro said service over the bridge had been restored and Yellow Line trains were running again. Metro also said trains were single tracking in each direction between Rosslyn and Foggy Bottom. Metro is advising Blue, Orange and Silver Line riders to expect delays.

SERVICE UPDATE: Due to ice/snow buildup on Yellow Line bridge, all Yellow trains will run btwn Huntington & Foggy Btm, via Rosslyn. #wmata

Blue Line: Trains are single tracking btwn Pentagon City & Foggy Bottom due to track problem outside Foggy Bottom. Expect delays in both dir

During the incident, Arlington firefighters said they were having trouble communicating with their D.C. counterparts, possibly due to D.C.’s use of encrypted public safety radios.

#ACFD Command having difficulties communicating with #DCFD about the situation at Foggy Bottom. Unsure if using encrypted channels for OPs.