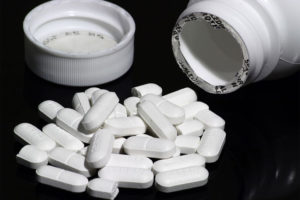 Two dogs were hospitalized last month after eating sausages left on the ground on N. Columbus Street near Lee Highway. The Animal League of Arlington now knows what made them sick: caffeine pills inserted into the sausages.

AWLA spokeswoman Kerry McKeel said in an email this afternoon that the two dogs displayed “restlessness, accelerated heart rate and distended abdomens” when brought to local veterinary hospitals, but were released the next day without lingering side effects.

After conducting a toxicology report on the raw sausage AWLA recovered on the sidewalk of the 2200 block of N. Columbus Street, the organization determined caffeine pills caused the dogs’ health issues.

It remains unclear whether the dogs were intentionally or accidentally poisoned, but if it’s found that the person who left the sausages did so intentionally, he or she could face up to a year of jail time for animal cruelty, McKeel said.

McKeel said last month dog owners should “be cautious when walking their dog and to be cognizant of anything they’re eating.”

Anyone with information about the incident is encouraged to call AWLA at 703-931-9241.