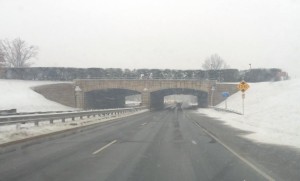 This morning’s snowfall is beginning to taper off, but not before causing some problems on the roads.

Many main roads were treated before the snow fell, making for an easy commute earlier this morning. The Arlington Public Schools cancellation and the federal government’s two hour delay resulted in much lighter traffic than usual.

As the snow has continued to fall throughout the morning commute, some neighborhood streets are now reported to be slick.

A hilly portion of S. Edgewood Street, near Columbia Pike, is being monitored by police due to cars getting stuck. Meanwhile, the following accident was photographed in Fairlington.

@ARLnowDOTcom it's slick out there. Seen in #fairlington. pic.twitter.com/cGzMOOXiu1

Arlington County government and county facilities are open, and trash and recycling collection is proceeding as usual.

Update at 9:55 a.m. — An Arlington County employee says that a lack of communication from the county, and at least one conflicting Facebook message, produced confusion among the county’s workforce this morning.

This morning the Arlington Employee Email alert system sent no message (at least to my phone) about County offices being open. This is in contrast to January 14, 26 and 27 (and most times when there are any weather questions in the past.) Moreover, for a period of time the County’s official Facebook page indicated that offices would be open two hours late. There was considerable confusion among County employees.

(I was momentarily confused by the Facebook message myself but chose to come to work anyway since there was no other notification one way or another.)

Not sure why communications broke down but of all days this is one where County employees could have used some accurate and timely guidance.

​Here is the message from January 27:

No such message today. Nada.