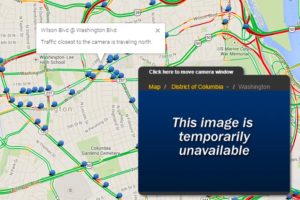 None of the traffic cameras on Arlington roads, save for interstate highways like I-66 and I-395, can currently be viewed by the public.

When trying to view the cameras on the website Trafficland.com, which the county’s own website links to, residents hoping to monitor traffic conditions on Wilson Blvd, Glebe Road and Columbia Pike are faced with a blue screen that reads “this image is temporarily unavailable.”

The feeds have been down, off and on, for months. In addition to residents trying to plan their commute, the cameras are also often used by members of the media for traffic reports and for reporting on crashes and road conditions during storms.

Arlington’s Department of Environmental Services says 90 percent of the county’s cameras are operational, and all the viewing issues lie with TrafficLand.

“Many cameras on TrafficLand can be down at any given time, and this is due to connectivity issues between functioning cameras and their website feed,” Baxter wrote in an email. “The county provides TrafficLand access to our video feeds. The connection between our feed and their server is up to them to maintain.” 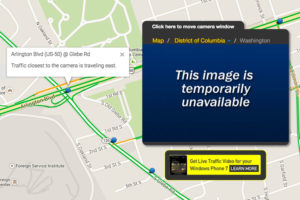 There is no alternative place for the public to view these cameras, DES spokeswoman Jessica Baxter told ARLnow.com. A random sampling of other jurisdictions’ cameras revealed that most VDOT, D.C. and Montgomery County traffic cameras were working on Trafficland.

While the county maintains that the public’s inability to view the feeds is TrafficLand’s fault, it is currently undergoing a technological overhaul of the system. Starting next month, DES will begin to replace the copper wiring in its communication system with a fiber optic system as part of its ConnectArlington project, Baxter said. The project is expected to be completed in spring 2016.

“The new technology is expected to improve the connectivity and reliability of the County’s CCTV camera system,” she said. “It’s anticipated that the fiber upgrade will resolve the cameras that are down and improve reliability.”

Baxter could not say whether the fiber replacement would improve access to cameras via TrafficLand.

So far, TrafficLand has not responded to a request for comment.

END_OF_DOCUMENT_TOKEN_TO_BE_REPLACED

More Stories
Tech Tidbits: Data Recovery On Hard Drives with Bad SectorsAPS Has 5,500 Tablets and Laptops for Individual Student Use