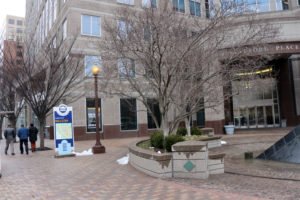 The second location of Orangetheory Fitness in Arlington is coming to Ballston, just two blocks from the Metro.

After opening in Rosslyn last summer, franchise owner Mark Steverson said the reception has been good enough to expand further in the county.

“We’ve been very busy, but more importantly, the community has really responded well and taken off with the concept of what we do here,” he said. “It’s great to see he community in better shape since we’ve moved in.”

Orangetheory’s next location will be at 4201 Wilson Blvd, in the ground floor of the National Science Foundation’s headquarters.

The space, a former Bank of America branch, is 4,200 square feet, Steverson said, and it will be the largest of Orangetheory’s 180 gyms in the country when it opens this summer.

“The bigger space will allow us to fit more people into a class, while keeping the group personal training feeling,” Steverson said.

While Steverson is prepping for a July opening in Ballston, he’s also looking for a third Orangetheory location in Arlington. He said he has a franchise agreement to open in Crystal City and Pentagon City, and is currently exploring locations. He hopes to open in south Arlington by the end of 2015.