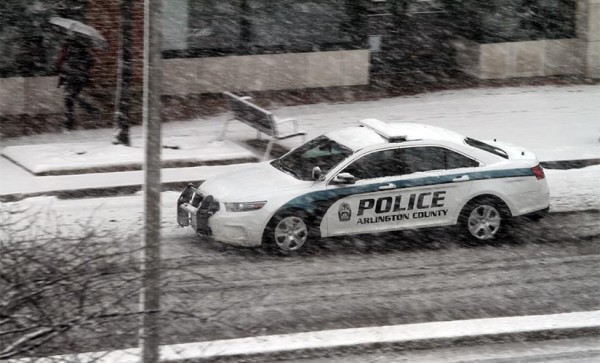 Most roads in Arlington are snow-covered as of noon today, as flakes continue to fall.

So far, 2-3 inches of snow accumulation have been reported.

The snow may have been responsible for one rollover accident this morning, near the intersection of 16th Street and S. Taylor Street. No injuries were reported but the road was closed for a period of time this morning. Other crashed have been reported in various parts of the county.

Residents are being strongly urged to stay off the roads unless absolutely necessary. Most seem to be heeding the advice, as traffic is light even on busy roads in Ballston.

Many flights in an out of Reagan National Airport have been cancelled. Those with air travel plans are being asked to monitor their flight status.

At Reagan National, the prospects of a flight out aren't so good. pic.twitter.com/4TnhhVyKBK

Most departures out of DCA are cancelled for the afternoon. Check with your airline for your specific flight info.

In addition to schools and governments, the snow is prompting numerous event cancellations.

Today's Girl Scout cookie sales in #Rosslynva have been canceled due to the weather. They will be rescheduled. http://t.co/JW1s49JT4Y @GSCNS

Today's SMART Start is cancelled due to weather. It has been rescheduled for Wed. 3/11 from 4:00-5:00 p.m. Call the Chamber with questions.

Tonight's School Board Meeting Canceled. An announcement will be sent if the meeting is rescheduled.