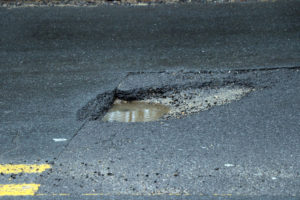 (Updated at 11:20 a.m.) Arlington roads are chock full of potholes after a snowy winter with plenty of freezing, thawing and refreezing.

Pothole-filled roads have been reported around the county and there have also been scattered accounts of flat tires and other pothole-related damage.

Arlington County has an online form for reporting potholes. Yesterday, we asked readers to report, via Twitter, the location of some of the worst potholes in Arlington. Here are some of the responses: 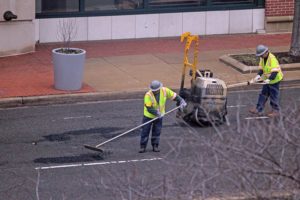 We’ll add another to the list: the stretch of S. Joyce Street in front of Pentagon Row. However, as of 11:15 a.m., county crews were out patching the pockmarked road.

One more big problem spot of note: the George Washington Parkway, near Spout Run Parkway, which was partially shut down this morning for repairs after “over a dozen cars” were damaged by potholes.

Arlington County says crews are now tackling potholes on major roads, with plans to get to neighborhood streets a bit later in the spring. From Dept. of Environmental Services spokeswoman Jessica Baxter:

It’s been a rough winter season on our roads, particularly with the amount of frozen precipitation and sustained periods of extreme cold temperatures. As we enter this spring season, it is our priority to get crews out there to make potholes repairs. We will do so for the next two months beginning with major arterials. This will include working late into some evenings on non-arterial streets, as well as scheduling teams for Saturday work when weather allows.

AAA Mid-Atlantic issued a press release this morning, suggesting that drivers should file claims for pothole damage against local governments. The press release (reprinted, after the jump) also has tips for avoiding potholes.

Each year, millions of motorists sustain billions of dollars in damages to their vehicles from potholes (nearly $6.4 billion), some as big as lunar craters. Although nearly fifty percent of all American motorists have experienced damage to their vehicles as a result of potholes over the last five years, fewer than five percent of drivers even bother to file a claim for pothole damage against the local or state government, advises AAA Mid-Atlantic.

In many jurisdictions across the nation, most claims for reimbursement are rejected, and some cities cite “sovereign immunity” as a fig-leaf. Yet area motorists have a legal right to submit a claim against the state or local government for the damages sustained while hitting a pothole, explains AAA Insurance. Although South Carolina paid more than $5 million in damages from state roads, including pothole damages, in 2014, many pothole claims are handled at the local level by area transportation or highway departments. For example, last March, “Richmond paid more than $14,000 for repairs to 38 vehicles damaged bypotholes,” according to media reports. Even in warmer climes like Tucson, Arizona, the city has reimbursed motorists more than $30,000 in pothole damage claims the past two winters. In 2013, New York City shelled out $5.5 million to motorists in potholedamage claims, while Chicago only paid out $187,217.

“The damages cost motorists billions yearly. It all could be an uphill battle, but it is worth filing a claim,” counsels John B. Townsend II, AAA Mid-Atlantic’s Manager of Public and Government Affairs. “To prove your claim and your case, get a photo of the pothole and get a photo of the damage to your vehicle in proximity to the pothole. Also save proper documentation, including repair shop receipts and invoices.”

Cities across the country, including Honolulu, Oakland, and Atlanta, are paying millions in damages in lawsuits over potholes big enough to cause fatal crashes and injuries to motorists, cyclists, pedestrians and motorcyclists, according to the auto club. Oakland’s payout to an injured cyclist was $3.25 million. In 2012, the city of Columbus, Ohio paid $1.25 million to settle a lawsuitclaiming a large pothole on the city streets contributed to a crash that left a cyclist paralyzed.

Driving on roads in need of repair and chock full of potholes will cost the average Washington, D.C motorist  $1,060.84 per year in extra vehicle repairs and operating costs, according to estimates from the American Society of Civil Engineers. That equates to a total cost of $425 million for District motorists annually. It’s $1.9 billion a year for Maryland motorists and $1.8 billion a year for Virginia drivers. Motorists in the District can file a pothole damage claim with the District Office of Risk Management.

Likewise, Maryland motorists can file a written claim with the Maryland Treasury Department for damage to the vehicle’s alignment, tires, hubcaps, and struts, advises AAA Insurance. In Virginia, the go-to-agency is the venerable Virginia Department of Transportation (VDOT) for reimbursement for the bent rims, blown tires and misaligned steering systems. VDOT informs motorists: “If drivers hit a pothole and experience damage to their vehicle, they have a legal right to submit a damage claim. Claims are investigated on a case-by-case basis. Investigators review the circumstances, the type and location of the pothole, if VDOT had been previously notified of the issue, and if crews had been given a reasonable amount of time to repair the pothole.”

Surprisingly, in the past five years only three percent of motorists have filed a damage claim with a  government agency, a third of motorists (31 percent) filed a claim with their own insurance company, and more than six out of ten (65 percent) paid for the repairs out of their own pockets. That’s according to a survey by Independent Insurance Agents & Brokers of America (IIABA) and Trusted Choice®. Drivers who hit a pothole and sustain damage to their vehicles can file a “claim for damages” in certain situations in some area jurisdictions. AAA makes it easy to report potholes in the DMV (The District, Maryland and Virginia) and get them fixed. Wishing to file a claim for pothole damage? Here’s how.

Also visit the AAA Mid-Atlantic News page on Facebook to post your photos of potholes or pothole-caused car damage. However, please doesn’t text, take photos, or use social media while driving. To aid motorists in protecting their vehicles frompothole damage, AAA recommends: