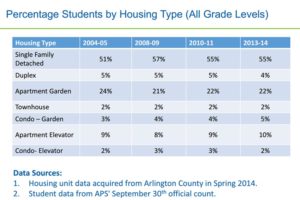 (Updated at 5:30 p.m.) While new apartments and condos make up the vast majority of new housing units in Arlington, most of the growth in Arlington’s booming public school population over the past decade has actually come from single family home neighborhoods, county and school officials said Wednesday night.

At a meeting of the Arlington Community Facilities Study Committee, staff from Arlington Public Schools and the county Department of Community Planning, Housing and Development reviewed the housing trends that have fueled explosive school growth over the last decade. Despite the constant influx of millennials into newly-constructed apartments and condos in the county’s Metro corridors, single-family homes remain the driver of APS capacity issues.

Currently, every 100 apartments in a building with an elevator produces only about 8 students, according to APS. For condo buildings it’s even lower — 3 students for every 100 units.

However, in an interview today, APS Assistant Superintendent for Facilities and Operations John Chadwick said that might not always be the case.

“That’s what really worries us,” he said. “The county is encouraging developers to build larger units, and in places like Brooklyn and Queens, families living in high-rises is the norm … Our very low [student] generation rates could really increase. If they do, we could be in real trouble.” 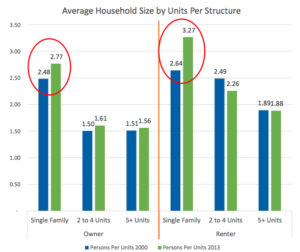 That growth hasn’t happened yet, although Chadwick said APS watches those numbers “very closely” so the district is not surprised if the trends shift. Until then, staff, committee members and observers from the community all agreed that the cause of growth among students in the county requires further study.

According to U.S. Census data gathered by Arlington’s Department of Community Planning, Housing and Development, the average size of single-family households has increased by 0.3 people among homeowners since 2000, and 0.6 people among home renters.

Several representatives of civic associations at last night’s meeting said they want the county to use data from single-family house teardowns that get rebuilt as substantially larger homes, as well as large additions. A parent in the Nottingham Elementary Parent Teacher Association said APS should adjust their projections based on the recent uptick in average household size among single-family homes.

“What’s happening in my neighborhood is there’s a huge stock of houses that were built in the ’50s are being knocked down, they’re being replaced by new large homes, all bought by younger families with lots of school kids,” the parent said. “We really need to dig into growth, not looking backwards at what did happen… You cannot assume that looking backwards is going to tell us the future.”

County-wide, 100 single-family homes generate about 42 students, according to APS data. But, Chadwick said, some neighborhoods are as high as 60 or 70. 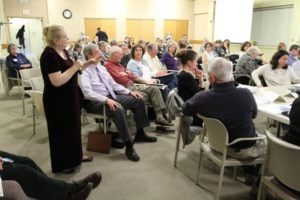 “What worries us is that in some communities, the single family homes have capacity for more students to come in,” he said. “It’s hard to figure out where and when that’s going to happen.”

A staffer at the meeting, when asked about predictive models based on house tear-downs and additions, said the data Arlington has is unreliable for school projections.

“The [demolition] permitting system was set up to collect fees, it wasn’t set up to project students,” the staffer said. “Unfortunately there’s limitations to that data … we’ve assembled it and that’s something we’re looking into with a similar question: can it be predictive given the constraints that we have?”

While single-family detached homes make up most of the land in Arlington County, those homes only make up 26 percent of the housing stock. 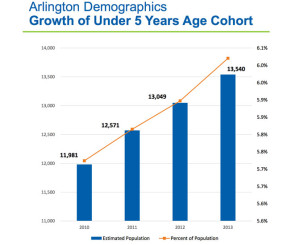 More students are surely on the way. Arlington’s population of children under five years of age — children soon to be APS’ responsibility — grew by almost 2,000 from 2010 to 2013, with a trend line suggesting the numbers have only grown more since.

At the same time, the number of children born in Arlington who go on to attend Arlington Public Schools has grown, from 55 percent in 2005 to 75 percent this year, according to APS data.

This year’s kindergarten class broke the record for APS’ largest. That record won’t stand long — next year the class will be even bigger.

APS has several projects to add capacity ongoing right now, including building Discovery Elementary School next to Williamsburg Middle School; designing a new school in Rosslyn in which to move H-B Woodlawn, while renovated the Stratford site into a community middle school; designing an additional to McKinley Elementary School; and adding 300 seats onto Washington-Lee High School.

In the meantime, the facilities study committee will be working to explore long-term solutions, analyzing the county’s needs holistically — including for parks and county facilities — and come before the Arlington County Board with a recommendation by the end of the year. What APS won’t do, Chadwick said, is build before the district is sure it has to.

“We have to be really careful, because we don’t want to overbuild,” he said. “In the ’70s and ’80s, we gave buildings away because enrollment declined.” 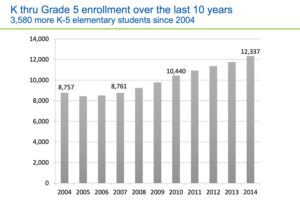 Looking forward, the swell of students currently in Arlington elementary schools are destined to be high school students some day. By 2019, APS expects its high school class to grow by 1,800 students — the equivalent of a brand new high school.

While the Facilities Study Committee works on recommendations for the county and the school boards, APS has some ideas in mind. The school system received $5 million in bond funding in November for the 300-seat expansion at Washington-Lee, and Chadwick said the same option will likely be exercised at Wakefield and Yorktown.

Arlington Career Center, currently housing programs for students developing technical skills, is also scheduled to have a “phased transition” into a “capacity-bearing high school,” Chadwick said, although it’s undetermined if that would be as a neighborhood school or a specialized magnet school, similar to Fairfax County’s Thomas Jefferson High School for Science and Technology.