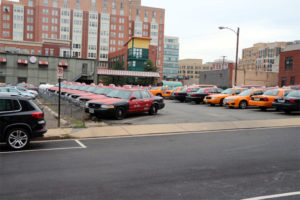 (Updated at 12:50 p.m.) Red Top Cab may be considering selling its headquarters in Clarendon, but it’s not considering ending its service in Arlington, company officials say.

Red Top has signed a purchase agreement with a developer for its properties on Washington Blvd and N. Hudson Street, the Washington Business Journal reported. While that article said Red Top’s future was “unclear” — the reporter was not able to talk to a Red Top rep before publication — Director of Sales and Marketing Von Pelot says the company’s future is secure, even in the age of Uber.

“I was reminded of the words of Mark Twain when his obituary was prematurely published, ‘Reports of my demise are greatly exaggerated,'” Pelot said via email. “Our recent development and introduction of the Red Top Select app which provides our customers with the convenience of booking, tracking, and paying for their ride through their mobile phone, is an example of our continuing commitment to our customers and our community.”

“Red Top Cab has served our community for over fifty years and plans to continue to do so,” Pelot continued. “Over the years we have moved our offices from time to time to update our facilities and accommodate a growing staff. Each time careful planning has enabled us to make these moves without any interruption of service to our customers.”

Red Top moved to its N. Hudson Street location in 1970, after its founding in 1964 by Washington-Lee High School graduate Neal Nichols. Before that it had another office in Clarendon, at 10th Street and N. Highland Street. Red Top’s dispatch center moved to a nearby location at 3251 Washington Blvd in 1994, Pelot recounted.

While a redevelopment deal has been struck, with plans to eventually build 584 apartments on Red Top’s property, Pelot said Red Top is staying put for now.

“No move is imminent,” he said. “Planning is very much in the early stages.”

Pelot declined to discuss where Red Top may move its offices next.

“As is often the case in situations such as this, discussions about relocating our facilities are governed by rules of confidentiality and I can only tell you that we plan to continue to provide service to our Arlington community,” he said.