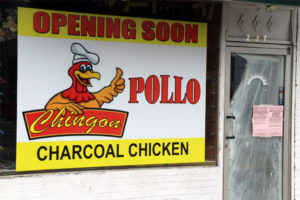 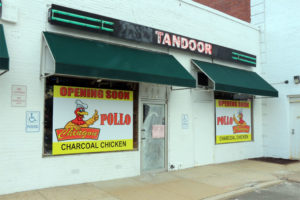 Anyone who speaks the language, however, sees a name that could be construed, at best, as cheeky and, at worst, as profane.

“Chingon” is a Spanish slang term that is often used as a compliment, but it’s a conjugation of the verb “chingar,” which in Mexico roughly translates to the English profanity that begins with “F.” ARLnow.com asked a Spanish speaker how she would interpret the name “Chingon Pollo.”

“Chingar is to f-ck and -on means real big ‘ol, so literally ‘real big ol f-cker’ but figuratively like ‘big f-cking’ something,” she said, declining to be identified. The whole name could mean “like a f-ckload of chicken, or possibly really hardcore badass chicken, but more literally a f-ckload.”

“That is crazy, I can’t believe they can name it that,” she added. The name can also be translated more innocently as “damn good chicken.”

A sign in the window says Chingon Pollo is “opening soon.” The restaurant is located at 237 N. Glebe Road, in the former Tandoor restaurant space. In 2013 Tandoor relocated to Ballston Common Mall.