Todd Moore, inventor of the White Noise app and founder of app development company TMSoft, testified before Congress this week (his testimony begins at 1:06:40), advocating for a bill that would curb “patent trolling.”

Patent trolling, Moore says, is when a company that has bought patents threatens small businesses with frivolous patent infringement lawsuits, which, if a small business tried to fight, will often bankrupt it. As relief, the trolls tell the company to send them thousands of dollars to obtain a license.

“It feels like you’re being bullied,” Moore told ARLnow.com yesterday. “That’s what these guys are, they’re well-financed bullies, and they’re abusing the system.”

Moore was eventually saved from paying thousands — if not millions, he says — by the nonprofit Public Patent Foundation, which provided him with a pro bono lawyer. Once Lodsys, the shell corporation suing Moore, learned the entrepreneur had retained a no-cost lawyer, it dropped the suit. 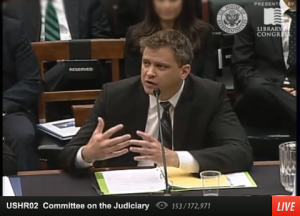 Most startups aren’t so lucky, Moore said. Many will simply pay the licensing fee to make the patent troll go away — which makes them susceptible to other trolls seeking to profit from more frivolous lawsuits. Others will fight, but the way patent law is set up leads to lawsuit defenses, even against lawsuits with minimal legal standing, prohibitively expensive.

Moore tells a story about college students developing a product in a startup incubator who were threatened with a lawsuit by a patent troll. They were developing promising technology, but instead folded their company because they couldn’t even pay the licensing fee — $3,500 in Moore’s case — that trolls ask for to avoid a lawsuit.

“It’s hard enough to build and run a successful startup,” Moore said. “I can’t tell you how much time I’ve spent trying to fix this issue. That’s time I could have spent building my products.”

Moore went before the House of Representatives Subcommittee on the Courts, Intellectual Property and the Internet to advocate Congress passing the Innovation Act, which would close several loopholes in patent law. It would require anyone suing for patent infringement to: specifically name which part of a patent is being infringed upon, the principal business of the suing party, and the actual company or person suing the business.

Lodsys is said to be a “patent monetization firm” with “no assets or employees other than a few patents.” The company asked Moore to mail the money overseas, presumably so the company doesn’t have to pay U.S. taxes. It’s an issue that’s stifling the innovation economy, Moore says, which is what Arlington is trying to grow.